Hi and welcome to my Garden Railway Blog:

I’m from the Old Skool way of doing things, very much the paper and pencil type. The collection of notes diagrams etc., has started to get o...

A brief history of the Wangerooge Island Railway:

Of the Eastern most of the East Frisian Islands the 1000mm-gauge Wangerooge Island Railway has been running since 1897, originally constructed and operated by the Grand Duchy of Oldenburg.
From December 1899 it was agreed that the Navy may also use the island railway tracks for their own purposes, provided that normal rail traffic is not disrupted.
During 1920 the GOE becomes incorporated into the new Reichseisenbahnen of the German Reich, and with it the Wangerooge Island Railway. The vehicles now belong to the RBD Oldenburg and were based in the Oldenburg Hbf.
During 1935 the RBD Oldenburg is dissolved, now the RBD Münster is responsible. The home of the vehicles remain at the Oldenburg depot.
From 1939 the armament and war preparations start to take place on Wangerooge, the Navy now effectively control the island railway, which leads to considerable tension between the Reichsbahn and the military on the island. With the outbreak of the Second World War, civil traffic on the island collapses completely.
From May 1946, in addition to the extensive track construction, the Kriegsmarine also brought several vehicles to Wangerooge during the war, at the end of the hostilities the Wangerooge municipality is allowed to take ownership of the navy vehicles.
September 1949 the Deutsche Bundesbahn is founded and the Wangerooge Inselbahn now becomes part of the new state-owned company.
January 1972 the BD Münster is given up, officially Wangerooge is now part of the BD Hannover area.
January 1994 with the dissolution of the Deutsche Bundesbahn, the Wangerooge Inselbahn becomes part of Deutsche Bahn AG.
In 1999, Deutsche Bahn assigns the island railway to DB Reise & Touristik, the long-distance transport division of the DB Group.
In 2003 the Wangerooge island railway is added to the DB subsidiary DB AutoZug GmbH based in Dortmund.
October 2013 DB AutoZug GmbH is dissolved, completely transferred back to the parent company DB Fernverkehr AG. This means that all of the Wangerooge Island Railway's vehicles change ownership again, and remain so to the present day.
The following book was purchased, proved invaluable with the origins and history of the Wangerooge Island Railway. 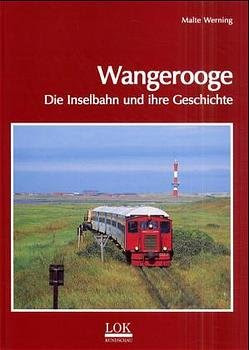 Wangerooge is and certainly was a special case among the German narrow-gauge railways. Malte Werning has written a wonderful book on the subject "Wangerooge - The island railway and its history".
Although the focus of the book is on the railroad, numerous other contemporary aspects (history, economy) are also examined. In this respect, the publication is aimed at readers who are really interested in the model.
There are many large format photos and sketches in the book, especially very atmospheric photos. In addition, the volume contains complete and probably unique vehicle inventory lists, etc.
In eight chapters and seven appendices, Malte Werning deals with the exciting topic of the former GOE line (Großherzoglich Oldenburgische Eisenbahnen) in an absolutely exhaustive manner - as far as the sparse sources allow it.
Especially friends of bygone eras - to which the author belongs - get their money's worth. But even "modernists" have the book safely on their shelves. The island railway has been running on Wangerooge between the pier in the west of the island and the island town for 108 years.
As the only one of the North Sea island railways, the meter-gauge line has always belonged to the state railway. Built by the Grand Ducal Oldenburg Railway (GOE), later operated by the DR and DB, the island railway today has its own branch of the DB AutoZug GmbH division of Deutsche Bahn AG.
The eventful history of the railway and its vehicles is traced in this book, which sets a monument in numerous impressive color and black and white photos of this last West German DB narrow-gauge railway.
Newer Post Older Post Home